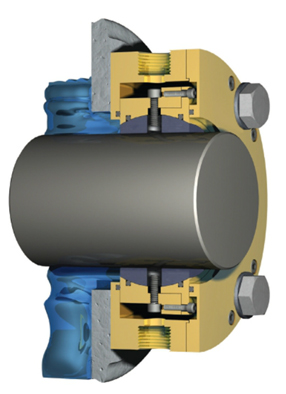 Packing has been used to seal rotating equipment for years. In fact, it is one of the oldest, if not the oldest, form of sealing a rotating shaft. However, packing is notorious for damaging shafts, yet it continues to be widely used in rotating equipment. Packing not only damages equipment, but it also involves a good amount of maintenance, which takes up valuable time. The other major cost, which can be minimal depending on the service, is the cost to flush the packing. Packing creates heat via friction and thus needs to be flushed in order to remain cool. This can be done with water, but in most cases it is done with the product it is sealing (such as light gas oil in refineries), and this can get very expensive. Nevertheless, packing is still widely used to seal pumps, agitators, mixers, conveyors and many other products in the field.

Packing does indeed offer benefits to the user, as it is relatively inexpensive, comes in many different materials and is a proven solution. It works particularly well in services where the product is neither dangerous nor valuable, such as vertical pumps in cooling towers. In the end though, packing will eventually leak and will leak sooner if it is not attended to properly. Packing works thanks to the pressure asserted by the gland, in essence making it impossible for the product to pass through. However, the product and the shaft will eventually wear the packing down and thus the gland continually needs to be tightened in order to maintain the pressure and consequently the seal. The packing will leak if it is not tighten properly, and it will also fail prematurely if it is over tightened. Packing is thus in a death spiral, as it can only be tightened so much, before it cannot be tightened any further and it needs to be replaced. 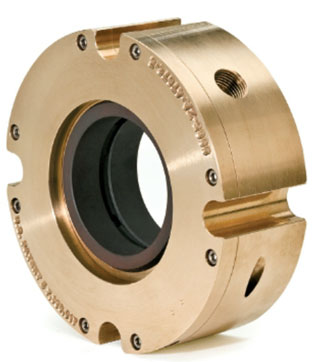 Mechanical seals work great on pumps, compressors, reactors and other critical and precise pieces of equipment. However, they tend to be very sensitive to system upsets. This is due to the very flat and extremely small clearance of the two seal faces. These faces are made up of two different materials: one rotates, while the other is stationary. The seal faces are the primary seal and are the most sensitive part of the seal. These seals must not touch, but they must also stay inexplicably close. The seal will fail if the faces rub or if they are pulled apart and therefore why mechanical seals are sensitive to system upsets and to the environment in which they are installed.

One final, and relatively new, alternative to packing are air or gas purged seals. Air seals are a clearance seal, meaning there are no contacting parts that are critical to sealing, and thus there is minimal wear. These seals require that the pressure in the seal be greater than the pressure in the equipment they are sealing. The air or gas is subsequently leaked to the atmosphere as well as into the product, thus the service needs to be compatible with the sealing media and the equipment needs to be vented. Air or gas purged seals also rely heavily on the tight clearance between the seal and the shaft, and as a result can fail and/or become inefficient if that clearance is opened up.

These criteria of course create challenges for an air/gas purged seal, but these seals also come with a tremendous upside. Air/gas seals are a permanent sealing solution; they do not require tightening or complex secondary systems. In fact, their only requirement is that the pressure inside of the seal is greater than the pressure it is sealing against. Therefore, it makes the seal adjustable, for example, you can turn the pressure up or down if there is a change in the system. These seals are also maintenance free thanks to the lack of contacting faces or parts, which means that it can run longer than the piece of equipment it is sealing. Some air seals designs even allow for shaft run-outs and misalignment, making them very adaptable to various pieces of equipment.

In the end, there is no one size fits all sealing solution for rotating equipment and therefore why there are so many options. Mechanical seals will always be needed in high speed, high pressure and highly critical applications, but they require a high level of precision, which makes them unsuitable for a large number of services in the market. These other services are where packing is normally used, because packing does not require the level of precision nor is it as delicate as mechanical seals. Examples of these applications would be screw conveyors, bulk solids, agitators and many others.

This is where air/gas seals are great alternatives to packing, because they can successfully seal the majority of the applications that packing does. Not only can they seal the same applications, but they do so with less maintenance, higher mean time between repairs and will not damage your equipment. Packing will undoubtedly be used in some capacity for the life of rotating equipment, but thanks to new sealing technologies, such as air/gas seals, they are no longer the only option.