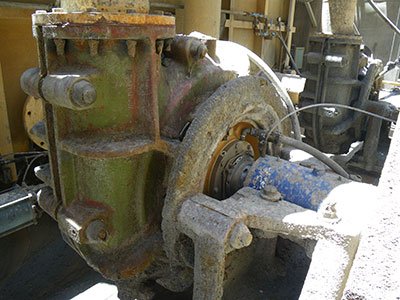 Initial costs and life cycle costs affect which sealing method is chosen for an application. If a sealing device cannot be considered an investment or will not produce an immediate return, there is little incentive for a change or upgrade.

Environmental stewardship can also play a role in choosing a sealing method. States and provinces have instituted heavy mandates that strictly control water consumption and effluent discharge. In some industries, water controls the environment in which the sealing method operates and plays an important part in increasing seal reliability. With the added concern of water reduction mandates, usage fines and the potential negative impact on reliability process industries are faced with doing more with less.

The BAT approach is based on optimized economics and what makes sense for the user. It is dictated by equipment design, realistic seal life cycles, slurry characteristics and budget. Equipment with less than desirable sealing life cycles and the hard-to-seal equipment should be the area of focus. Sealing knowledge of when to use what technology i.e., mechanical packing or mechanical seals is critical to the BAT process. The sealing approach determined through BAT will optimize upfront costs while meeting expected life cycles.

The old 80/20 rule applies. A small population of the equipment can represent a large portion of the sealing costs associated with sealing bad actors or hard-to-seal equipment in slurry processes.

In the BAT evaluation process, the bad actors associated with a high cost of ownership are identified. This formal approach should include a survey identifying the equipment population, including the bad actors, and the goals to be achieved. BAT is assisted through root cause failure analysis and slurry classification studies. This process can be conducted throughout the plant or with a specific focus, i.e., a bank of pumps.

The term slurry by itself is not considered enough information for BAT recommendations. The properties of slurries and the tolerance to apply BAT vary for a process or industry.

Slurries can be classified as having Newtonian properties or non- Newtonian properties. A Newtonian fluid behaves like water. The flow characteristics are somewhat normal in that the fluid will have a viscosity similar to water. The ability of this fluid to settle out particles quickly and provide more free water for lubrication classifies it as “settling” slurry.

A non-Newtonian slurry is considered “non-settling.” The slurry properties are such that particles will not settle out easily and will tend to be a more homogeneous mixture of the fluid carrier and particles. The non-settling slurry will have less free water for lubrication and/or thermal dissipation properties.

Dewatering slurries have lower densities. A paper pulp application is a perfect example of slurry, which will collect at low flow, less turbulent areas closest to the seal gland where the sealing device resides. This dewatering effect will insulate sealing device or block the flow of water, thus supporting a dry run condition and generating excess heat.

Most equipment in the slurry industries is large. It can be sealed with reliable, time efficient split sealing solutions that save money, production and labor hours. Split sealing can be economically justifiable when all life cycle costs are considered.

The BAT approach to sealing considers the best sealing technologies, which contain slurry features inherent in their design increasing reliability, but also allows the reduction or elimination of flush water.

A mechanical seal design that places the springs entirely outside the seal will deliver higher performance levels. In slurry applications the slurry will migrate or precipitate across the seal faces. This is an uncontrollable event. Springs located entirely outside the seal (visible springs) will avoid the fouling that takes place internally and continue to deliver the closing force required to keep the faces tracking properly.

Micropolishing the dynamic o-ring surface is a process that improves the surface finish that the o-ring has to travel. The surface is manufactured to a mirror-like finish to reduce the friction between the o-ring and the dynamic sealing surface. Proper seal face tracking will continue over the life of the seal. Non-settling and dewatering type applications can insulate seal faces and increase the heat buildup. As a result, o-ring properties can be affected, limiting their sealing performance and introducing a problem with seal face hang-up.

In heavy slurry applications seal faces must be protected from possible impact of large solids, which can be as hard as rock. Seal face encapsulated in metal shrouds for protection is desirable.

Dual seals are often used to increase seal life cycles in slurry applications. They can be a relatively high expense on upfront acquisition and utility cost. Dual seals offer the ability to pressurize a clean fluid, sometimes called barrier fluid, between two sets of seal faces. This arrangement is described as Plan 53 or Plan 54. Plan 53 uses a seal support tank to supply barrier fluid to the seal; Plan 54 uses an outside source, or flow through arrangement. In both, the pressure is set to a minimum of 15 psig (1 bar g) above the seal chamber pressure. This sealing approach ensures that a clean fluid is forced between the inboard set of seal faces, which would otherwise be the slurry in a single seal installation. Plan 54 can be an area for significant water reduction improvements since the flow through arrangement is associated with wasteful, high water flow rates to drain. Another area for savings is a means to reduce process dilution. Visibility to inboard seal leakage can be achieved with addition of a dual flowmeter. To evaluate the BAT opportunities at a plant, work with a single point supplier that is knowledgeable in all the sealing technologies mentioned. A supplier can deliver BAT, considering all of the following: