Improper Gasketed Joints Can Be Deadly

Safety is a concern at any industrial site. An Occupational Safety and Health Administration compliance specialist has stated that safety should be more than a priority: “Priorities in an organization can and usually do change. Safety and health need to be a core value of the organization.”1

Safety can be a case of values versus priorities. When it comes to sealing devices, perceived dangers sometimes are overlooked. The case of an explosion at a refinery in Anacortes, Washington, shows how deadly accidents can occur when safety risks are distorted.

A heat exchanger, known as E-6600E, catastrophically ruptured at the Tesoro refinery in Anacortes on April 2, 2010 (see Image 1). Highly flammable hydrogen and naphtha at more than 500 F were released from the ruptured heat exchanger and ignited, causing an explosion and an intense fire that burned for more than three hours. The rupture fatally injured seven Tesoro employees (one shift supervisor and six operators) working near the heat exchanger. 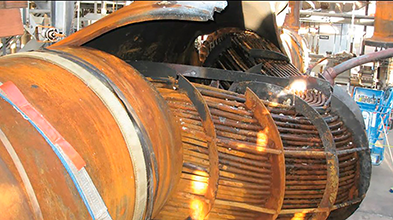 Ruptured heat exchanger (Courtesy of the U.S. Chemical Safety Board)

The Anacortes incident has been reviewed by many organizations, including the Chemical Safety Board (CSB), which released a 160-page report.2 Acceptance of a non-safety-focused culture is one of the major points made in the CSB report. This accident and the CSB report illuminate many lessons regarding how engineers and maintenance personnel should look at flange leakage and use sealing technology correctly. The Fluid Sealing Association’s focus is to assist in educating the industry in sealing technology to create a safer working environment.

E-6600E’s flanges had been leaking for many years before the accident. As stated in the CSB report, “The NHT heat exchangers frequently leaked flammable hydrocarbons during startup, sometimes resulting in fires … management had been complacent about these hazardous leaks and did not always investigate the cause of the leaks.”

The report discusses how the corrective action process failed to resolve these problems. Actions included the use of steam lances to spray on the leaking flanges during startup to mitigate fires. This required additional personnel near the NHT heat exchanger. Another action was to increase the heat to lessen the heat-up time of the heat exchanger—a contributing factor to the rupture. The use of clamps and active leak repair can mask the underlying sealing problem.

The leakage of these flanges was a technical issue of engineering design, maintenance and sealing devices. The plant sporadically attempted to prevent leaking of the NHT heat exchangers. These attempts included: gasket modifications; changes to torque and bolting practices; resurfacing of flange surfaces; and the installation of warm-up piping to smooth the equipment’s transition from cold to hot during heat exchanger startup.

Despite published industry best practices that require use of new heat exchanger gaskets after change out, documents indicate that the new heat exchanger gaskets could be reused after flange disassembly at subsequent cleaning cycles. This exemplifies lack of knowledge in sealing devices by not following gasket manufacturer and industry best practice guidance that gaskets should never be reused.

The information may have come from the gasket distributor, which might have had a lack of knowledge. (The Fluid Sealing Association has a gasket manual available at fluidsealing.com.)

Why should a gasket not be reused? First, when gaskets are installed they are compressed and take a permanent set. The gasket’s whole design is to conform to the flange face and seal. If the gasket were 100 percent elastic—such as with homogeneous rubber sheet and molded parts used at ambient temperature and not exposed to elevated temperature—reuse would not be such an issue.

When a sheet gasket made of compressed fibers, inert fillers with rubber binders or polytetrafluoroethylene (PTFE), or metal with flexible graphite filler/laminate is compressed, it is irreversibly densified. When the compressive load is released, it does not return to its original shape. It will not seal under the same assembly conditions as it did when first installed.

Second, heat changes the gasket material’s form and properties. Heat will cure and harden gasket materials that contain rubber. At elevated temperatures, the metal used in 100 percent metal and composite metal gaskets can be subject to the reduction of their yield point. Elevated temperature will alter stress versus strain characteristics, taking the material out of the elastic region—causing permanent deformation and a reduction or elimination of resilience.

Thermal growth rate differences of head flanges, tube-sheets, bolts and gaskets create an upset of the gasket-flange interface and a loss of seating stress on the gasket that can cause flanges to leak. As the equipment heats, the exchanger flanges’ faces grow axially and radially. Axial growth causes compressive stresses on the gasket beyond what was provided by the bolt pre-load. Because the flanges and gasket are made of different material, the rates of thermal expansion are different.

Radial growth causes the flange surfaces to wipe across the gasket, upsetting the gasket-flange interface and potentially causing leak paths. Some gaskets, such as corrugated metal with flexible graphite laminates, handle this service better than others. A test developed by the now-defunct Tightness Testing and Research Laboratory of the Polytechnique Montréal included an evaluation to address this called the Radial Shear Test (RAST). Another technology (flange springs) could have been used to give more travel during this time that could have kept a larger seating stress on the gasket.

The 2010 explosion at Anacortes was not directly caused by poor gasket application. The NHT heat exchanger vessel ruptured and caused the fire because of the vessel material’s high temperature hydrogen attack, which is metal deterioration from high temperature hydrogen contact. Because of safety complacency that accepted heat exchanger leaks during startup, additional personnel were required to manage those leaks, which led to the tragic loss of life. Technology and know-how are available to assure safe sealing that can make sure everyone safely ends the work day.