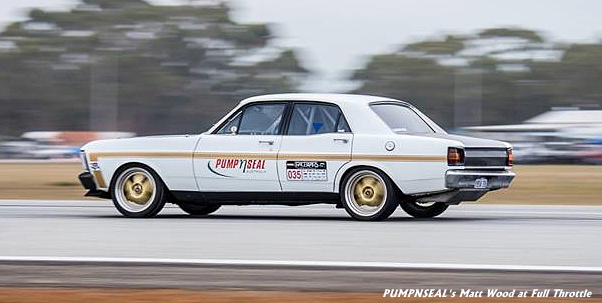 At a remote airstrip in Albany recently, PUMPNSEAL Senior Sales Engineer, Matt Wood, put his speed to the test. RACEWARS is an event for car enthusiasts to test the limits of their much-modified vehicles. In most cases PUMPNSEAL work with figures of litres per second and metres of head, but in this instance, Matt’s 1970 “Super Roo” XW Falcon managed a top speed of 241km/hr(old school = 149.75mph) over the 1000m Vmax challenge and still had some legs left in the old Ford.

Quickest on the day was John Kopcheff who recorded an incredible maximum speed of 324.97km/h (201.93 mph) from a standing start. Incredibly, he actually drove his 2011 Lamborghini LP1600-4 twin-turbo Gallardo to the event from the other side of Australia. One second slower was a vanilla looking 2002 VT Commodore which reached 188mph. Maybe the parachute on the back was a giveaway that all was not standard?

For more details check out the video from inside Matt’s car .